“I got over three bags of 50 kilograms each this season [despite drought] from my one-and-quarter-acre farm. This is amazing! I have never harvested anything beyond one-and-a-half bags in the past.” 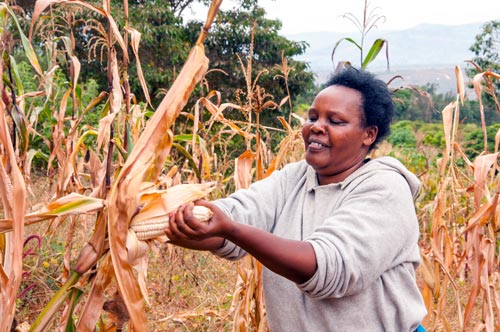 Sarah’s smile is due to KDV4 drought-tolerant maize. Her first-time ‘drought insurance’ venture has paid off, and she’s harvested more despite the drought than she normally does even in good years.
Photo credit: B. Wawa/CIMMYT

Drought is one of the biggest challenges that rain-dependent farmers in Africa face. As a result, millions of smallholders and their families become increasingly vulnerable to crop failure that leads to hunger and deeper poverty. What options do smallholders have in the face of drought?

For Mrs. Sarah Nyamai, a farmer from Kalimoni Village in Machakos County, Kenya, maize farming was not a priority until three years ago. She did not take maize farming very seriously – despite the fact that maize has been a staple food in her home for a long time – largely because of very poor yields often blamed on the unforgiving climate that characterizes eastern Kenya.

However, harsh climate is not the only problem that Sarah and hundreds of other farmers in her locality are grappling with. Poor-quality seed makes a bad situation much worse. This means that the likelihood of harvesting enough for the family table is very low. And this, despite the considerable time and resources farmers invest in working the land.

The planting season in Kalimoni Village falls during the March–May long rains. This year, the rainfall was not only very low but also poorly distributed, spelling doom for any good harvest.

Despite this bleak outlook, there is hope for farmers who took preventive measures. Sarah’s face lights up as she harvests a healthy maize cob on her one-and-a-quarter-acre farm. She planted – for the first time – a drought-tolerant (DT) maize variety called KDV4. Her ‘drought insurance’ venture paid off, and she has much to smile about. “I got over three bags of 50 kilograms each this season from my one-and-quarter-acre farm. This is amazing! I have never harvested anything beyond one-and-a-half bags in the past. This is very good seed! And it tastes better too!” Sarah enthuses. 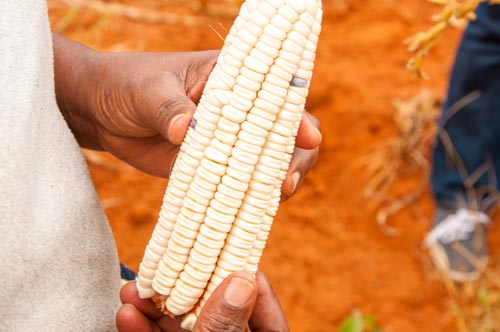 A picture of robust health and vitality: like most other improved DT maize varieties, KDV4 truly comes into its own in drought, and does even better when there is no drought.
Photo credit: B. Wawa/CIMMYT

KDV4 is one of the DT varieties sold in Kenya’s eastern drylands alongside other improved varieties, developed by the Drought Tolerant Maize for Africa (DTMA) Project in close partnership with public and private partners including local seed companies in Kenya.

Sarah purchased a three-kilogram packet of the KDV4 variety from Dryland Seeds Limited (DSL), the main supplier of DT maize seed in the eastern region. Besides KDV4 maize – an open pollinated variety – DSL also stocks a number of hybrid varieties tailored especially for this region. One such hybrid is DSLH103, locally known as Sawa, a Kiswahili name that loosely translates into ‘the good one’.

Mr. Joseph Mulei is one of the farmers who has planted Sawa. “Sawa has very good yield. I like it particularly because it matures early. If we get good rains in the first two weeks, I am assured of very good harvest from Sawa,” explains Mulei.

Sawa statistics, the story is spreading, but much more remains to be done

Statistics too stand by and reaffirm the Sawa label. On average, hybrids like Sawa give farmers up to 49 percent more grain than open pollinated varieties, and 15 percent more than hybrids currently on the market.

Both Joseph and Sarah have taken the initiative to educate their fellow farmers on the benefits of certified DT seed. Mulei has been particularly influential in his capacity as a leader of 25 farmers in the area. They both concur that it is important for more farmers to plant the improved varieties since they are a guarantee to improving food security.

Yet despite this assurance, improved varieties in the eastern region are still not widespread according to Mr. Ngila Kimotho, the Managing Director of DSL. “More collaborative effort is needed to create awareness on the improved DT varieties, and more importantly, to ensure that the seeds are available for the farmers,” adds Ngila. The company has conducted several awareness campaigns including field demonstrations and radio programs in a bid to reach as many farmers as possible.

What is CIMMYT doing to spread DT maize?

DTMASS will make determined efforts to reach as many farmers as possible as an integral part of project goals. Consequently, many more farmers will enjoy the benefits of good yields even in the moderate droughts so common in most of Africa’s maize belt