Valeria Pantaleo Story: Hope and triumph in the midst of harsh climatic conditions 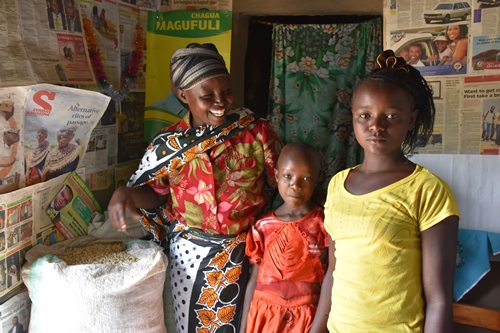 Valeria and her daughters and part of their bountiful maize harvest from ‘ngamia’ seed. B. Wawa/CIMMYT’

In Africa, farmers experience drought conditions often characterized by delayed rains, minimal and poorly distributed or failed rains altogether. For a small village in Olkalili, northern Tanzania – a semi-arid area, these harsh weather conditions are prevalent. As a result, farmers from this locality have often had to contend with low maize yields. However, the story of Valeria Pantaleo is one of hope and triumph following a handsome harvest from a drought-tolerant and nitrogen-use efficient maize variety HB513, she planted for the first time. This variety locally known as ngamia, Kiswahili name for camel, is one of the 16 hybrid varieties developed for Tanzania by the Drought Tolerant Maize for Africa Project. Meru Agro Tours and Consultant Company – sole distributor of HB513 – managed to reach many more farmers in Olkalili – just like Valeria – thanks to additional support from the Improved Maize for African Soils project to increase seed production and distribution. For Valeria, ngamia seed gave her more than just food. Read her story here.