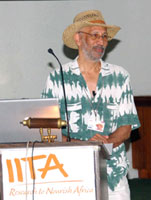 During the week of 15 – 19 September 2008, the Drought Tolerant Maize for Africa Project (DTMA) team met at the scenic IITA campus in Ibadan, Nigeria, to review progress made in 2008, share insights and plan for 2009. They were joined by the Project Advisory Board as well as collaborators from national agricultural research systems (NARS), seed companies and universities.

“The DTMA Project team represents a good balance in expertise, which combined with the maize drought tolerance technology, has great potential of reaching 30 to 40 million people,” said Hartmann, the IITA Director General (in the photo here), during the meeting’s opening.

“The DTMA Project needs to focus on local production, especially with the emerging twin challenges of climate change and the energy crisis. We also need to let other players own the process for sustainability; thus we need an exit strategy,” he added.

Marianne Bänziger, CIMMYT Global Maize Program Director remarked, “There is tremendous power in Africa – the creativity of its researchers, the large number of newly emerging seed companies and farmers who yearn to make their lives better. We need to tap into this power if we want to generate impact.”

Presentations highlighted achievements made in developing, disseminating and targeting new drought tolerant varieties as well as building the capacity of project collaborators. For example, the DTMA Project developed largescale drought screening sites in Kiboko, Kenya, and Ikene, Nigeria. There the first crop of maize under managed drought stress was grown to increase the availability of drought tolerant maize varieties in sub-Saharan Africa. Also, in seeking to motivate and move breeders toward data-driven breeding programs, the DTMA Project developed and promotes new maize data management tools – such as the International Maize Information Service (IMIS) and Fieldbook – freely available from the DTMA website (https://dtma.cimmyt.org/).

“The DTMA project provides opportunities in form of germplasm, varieties, breeder seed and trained personnel, and we encourage you to optimally use them,” said Wilfred Mwangi, DTMA Project Leader. During 2008, DTMA provided training in state-of-the-art maize breeding and variety release approaches as well as technology adoption studies and seed business management. Scientists from IITA, CIMMYT, NARS and established seed companies worked together to design and run the courses.

During the meeting, the participants held discussions along thematic and regional lines (Eastern, Western and Southern Africa), compared their experiences and challenges, and proposed strategies to improve the
DTMA Project. The discussions centered on diverse aspects of variety development; testing and release; technology dissemination; breeder and foundation seed production; as well as production and marketing of certified seed.

“One size does not fit all” was the meeting’s major conclusion. Africa is diverse and the various in-country teams will strive to carefully target their investments to mission-critical bottlenecks and effective scale-up strategies in the seed value chain. The teams tackled this challenge by beginning to develop seed and impact road maps, leaving no doubt that the impact targets of the DTMA Project will be achieved.